The exhibition “A Moment of Uncertainty” took place at CEPA gallery from May 2 through June 14, 2009 and featured two quite different sets of photographic images. The black and white gelatin silver prints were all from a single roll of 70mm film borrowed from Fermilab National Accelerator laboratory in Batavia Illinois.  While at first glance the prints seem identical, closer examination will show the very subtle contrails left by the passage of subatomic particles through the hydrogen bubble chamber – the particle detector in use at Fermilab throughout the 1970’s.  The bubble chamber was placed at the focus of the four-mile circumference “Tevatron” matter / anti-mattercollider (commonly called an “atom smasher”) and the twists and turns of the contrails reveal an entire menagerie of the fundamental constituents of matter: quarks, leptons and force carriers.  What these images show is not only these “building blocks” of all that exists, but also the mechanism of the machine that makes them visible, thereby demonstrating that our vision of the subatomic world is conditioned by and dependant upon instrumental extensions of our sense of sight.

The color prints were all from digital photographs I made of a display at the Museum of Jurassic Technology in Los Angeles California.  Invoking Einstein’s famous protest at the stochastic nature of quantum theory: “God doesn’t play dice,” they are of the museum’s collection of dice cast from the unstable material of nitrocellulose. Commonly employed in the late 19th and early 20th century not only for dice, but also billiard balls, clothing buttons and photographic roll film, nitrocellulose decomposes over time causing the crumbling forms depicted.  I have interspersed these to suggest not only the probabilistic nature of the universe but also the provisional and transitory nature of all of the matter contained within it.

To extend this project into empirical experience, I constructed a fully functional Cosmic Ray Spark Chamber to visualize the Muons that continuously bombard the Earth from deep space as well as a fully functional 400Kev Electron Accelerator that terminates in a Cloud Chamber.  Both of these are kinetic sculptural “vision machines” that extend our phenomenal gaze into the noumenal realm of quantum physics – they allow us to make visible the invisible…

Einstein’s 1921 Nobel prize was for one of his 1905 papers that proved the existence of photons – quanta of light.  However, he did not foresee the consequences of his quantum theory.  The theory began to evolve in an ad hoc fashion until the late 1920’s and early 1930’s when a younger generation of physicists codified it into the theory of quantum mechanics.  This theory demonstrates that photons of light are neither particles, nor waves – they are in fact, simultaneously both particles and waves!

There were two very disturbing consequences of this development.  The first consequence of quantum mechanics was that chance was seen to play a fundamental role in the way the world works.  This annoyed Einstein to the point where he remarked: “God doesn’t play dice!”  Up to that point in history, physics had been “deterministic” with a definite cause for all effects, a material fact that was not only discoverable, but there was also no room for uncertainty about that cause.  This was one of the central tenets not only of classical physics, but also the doctrine of materialism in all its various forms.  Quantum mechanics is however, inherently stochastic, a characteristic expressed in Werner Heisenberg’s famous “indeterminacy principle” that outlines the impossibility of measuring both the speed and the location of an object.  The infamous thought experiment by Erwin Schrödinger that involved a simultaneously dead and alive cat demonstrated the logical implications of quantum theory.  The second consequence of quantum mechanics was that the world is “non-local.”  In other words, quantum interactions take place over arbitrarily long distances with no apparent explanation of how this occurs.  For example, if two photons are emitted simultaneously in opposite directions, and one photon has a polarization in one direction, then its partner must spin in the opposite direction.  However, the first photon doesn’t have a definite direction of spin until it is measured, at which point its partner may be millions of kilometers away, regardless of distance, it will instantly manifest a spin opposite to the first photon!  Einstein was so annoyed by this development that he called it “spooky action at a distance.”

Einstein was profoundly uncomfortable with both indeterminacy and non-locality.  From that time until the end of his life in 1955, he worked unsuccessfully to eliminate them from quantum theory.  He did not believe that the theory was fundamentally wrong, he merely thought it to be “incomplete,” i.e. that what it was demonstrating were some kind of statistical averages of underlying phenomena that remained deterministic. David Bohm would come to call those phenomena “hidden variables.”  Einstein was decisively challenged in this effort by his theoretical nemesis Niels Bohr and his strident young disciple Werner Heisenberg.  Their formulation of the Copenhagen interpretation of quantum mechanics threw caution to the winds and abandoned determinist causality forever.  Over the lifetimes of theses physicists they and their allied followers continued to spar over this dispute.

The Copenhagen Interpretation of quantum mechanics seems to posit a certain metaphysical dualism in that the world as it exists apart from observation, matter and energy consist of waves of probability that are governed by Schrödinger’s Equation. These waves have an incontrovertible experimental reality because of the interference effects that can be experimentally observed, and also because of the fact that the three dimensional physical manifestation of atoms as “particles” seems entirely due to the three dimensional standing wave state of their electrons. If this were not so there would be nothing to “fill up” the empty space of atoms, except particles that would somehow have to be everywhere simultaneously.  These omnipresent particles are impossible because, in changing directions to fully occupy that space, they would radiate energy.  If those particles were treated as fields they could be said to fill the space of the atom but this only defers the problem, since, as we have already seen, fields in quantum mechanics require exchanges of virtual particles. On the other hand, the square of the wave function gives a probability distribution for where discrete particles may be found once the wave function is collapsed by an act of observation. The wave function thus contains the sum of all possible states of a system until the instant that it is observed. This produces the paradox of Schrödinger’s Cat, who is both alive and dead at the same time, in just the proportion probable to each state.

The act of observation, which collapses the wave function, conforms to the Kantian act of synthesis, by which phenomenal objects are introduced into consciousness and subjected to the categories of the understanding. Niels Bohr’s own principle of complementarity implied that matter and energy could exhibit wave properties, or particle properties, but never both at the same time. If what Kantian consciousness requires is discrete actual things in space and time, this is exactly what is delivered in quantum mechanics: Bohr stipulated that observers and their equipment are not subject to quantum mechanical probability effects. Why? Because the macroscopic world still follows the rules of “classical physics.”

As a contribution to the metaphysics of possibility, the quantum mechanical wave function can easily be seen as complementary to Kant’s idea of noumena, where various events can occur that are not comprehensible in terms of phenomenal reality. To make this work, Kant would either have to allow that characteristics of physical reality can intrude to some depth into noumena, or would have to posit a conditioning level of reality between unconditioned noumena and what we perceive as discrete phenomenal objects. The wave function straddles the classic Kantian boundary, sharing some properties with phenomena, others with noumena.  Thus, where Kant would have considered all of phenomena to be governed by determinism, we now see the wave function as an expression of the probability of the collapse of waves into standing wave “particles.”

Kant’s idea that space and time do not exist among noumena has been affirmed by both relativity theory and quantum mechanics. In relativity theory, time is prohibited from exceeding the velocity of light.  On the other hand, quantum mechanics now posits the concept of “non-locality,” this seems to mean that physical distances don’t actually exist – instead they are anthropocentric illusions. This means that while time may apply to the wave function, space does not.

This curious result is the consequence of the Einstein-Podolsky-Rosen experiment, which was intended by Einstein as a reductio ad absurdum of quantum mechanics. If, for instance, a positron and an election are both created from an energetic photon, the conservation of angular momentum requires that one be spinning one way, and the other the other. But the complementary spins are equally probable for each particle. Thus, in quantum mechanical terms, the wave functions of each particle divide without a discrete state being determined. The particles might then separate to even cosmological distances, but as soon as the spin of one particle is observed, the other particle must have the opposite spin, which means that the wave function has collapsed across those cosmological distances and caused the other particle to assume a predictable spin. Since this occurs instantaneously, it violates the limitation of the velocity of light in “Special Relativity.”This experiment, as we have already seen, was performed in 1982 by Alain Aspect and precisely follows Bell’s “inequality theorem” excluding all “hidden variables.” However, once observed, the “particles” in question revert to obeying special relativity and the limitations of spatial distance, creating precisely the kind of duality described by Kant. Bell himself found this result very disturbing, but to Kant it would fit in neatly to his theory that space is only imposed by the sensory representation of phenomenal objects. 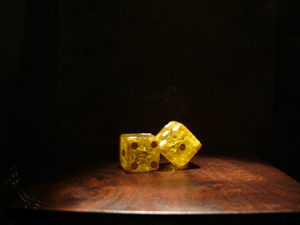 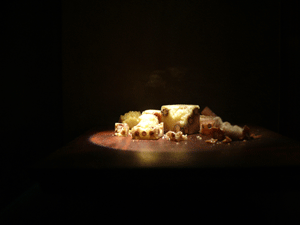 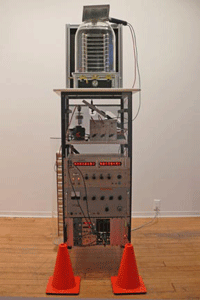 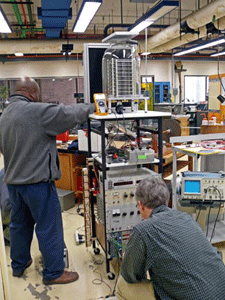 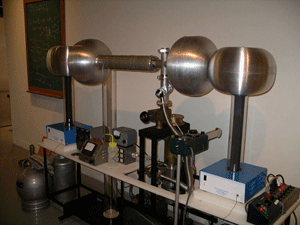 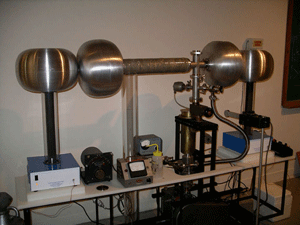