At the Dawn of the 21st Century: A View-Thought « The Red Window » (The Critical Time of the World Civilization) An Installation Art Project.

This study is to investigate the possibilities of developing a cross-culturally common conceptual visual language. In particular, this study evaluates whether it is possible to develop Collaborative New Art that will depict simultaneously both the Contemporary Art and the Modern Technological Civilization in which we live today. It is a general belief especially in the art community that contemporary art and modern art can enhance the distribution of diverse information, foster a profound universality in the human nature, and thus promote cross-cultural collaborations in all walks of lives. However, such a belief has also been questioned due to the overt differences of arts in structures, styles and philosophies perceived by different viewers. In this study, a set of contemporary arts will be evaluated. The comparative results will used to discuss four important issues: What are the salient sensations and reactions of the general public to the contemporary and modern artwork? To what extent the contemporary conceptual art could disclose the new trend of social value changes. Whether the contemporary art and modern art theory and practice would address and help to solve today’s social problems within each society. Whether the contemporary art and modern art has a role in harmonizing people with different geopolitical backgrounds and value systems. Finally, several implications will be discussed on the linkage issue between verbal and nor-verbal expressions of thoughts and feelings.

“ALL AROUND US ARE RACIAL AND TRIBAL, WAR, BORDER, PHENOMENON, TRAGEDY, VICTIM, CONFUSE AND CONFLICT. HOW ARE WE TO INTERPRET THESE — SIGNS OF THE TIMES — IN THEIR PROPER CONTEXT?”

I graduated from the Department of Fine and Applied Arts at Chulalongkorn University in 1996. Since graduation, I have been working as a media artist with Cyber Lab at the Center of Academic Resources, Chulalongkorn University. I work in the realm of contemporary art and am interested in revealing the unexplored facets of experience. In 1998, I secured funding and traveled as a visiting artist/researcher to several countries such as: Canada, the United States of America, Denmark, Finland, Norway, Sweden, Slovenia, Slovakia, Hungary, Croatia, Austria, Italy, Germany, Egypt, Singapore, Malaysia, Korea and Japan. I have already made some contribution to the development of the media arts through my artistic and research practice, and related international activity at the Banff Centre for the Arts (Canada), ImaginAsia Project, Smithsonian Institution (The Freer Gallery of Art and The Arthur M.Sackler Gallery, United State of America), ZKM Project, (Institute for Visual Media, Germany), Designskolen; Biennial Theatre Festival -Sight ‘n Vision, Nordic Theatre Union (Denmark), Fukuoka Asian Art Museum; Collaboration Art Network In-Between; Waseda University; Kobe University of Design (Japan), Central European University (Hungary), International Cultural Centre Jeunesses Musicales Croatia Groznjan (Croatia), The TOU SCENE Contemporary Centre of Art; The Nordland Kunst 0g Filmskole; The Trondheim Electronic Arts Centre; The Kunstakademiet Trondheim (Norway), Luleå Winter Biennial; The Beeoff/Splintermind; The Ricklundgården and The Royal University College of Fine Arts (Sweden), Kiasma Museum of Contemporary Art, The Pro Artibus Foundation and Art Centre Saksala ArtRadius (Finland), Galleria Civica di Arte Contemporanea and Drodesera>Centrale fies (Italy), MAAP-Multimedia Art Asia Pacific, Nanyang Technological University (Singapore), Rimbun Dahan and ABN AMRO-Malihom (Malaysia), Designing Your Future, Berlinale Talent Campus 2005, Haus der Kulturen der Welt (Germany) and Biennale Bibliotheca Alexandrina 2005, Arts Center, Bibliotheca Alexandrina (Egypt); Gyeonggido Museum of Art, Danwon Arts Museum and Arko Museum (Korea). I am directing my energies towards the exploration of the phenomenon of cross-interdisciplinary of art and culture, and searching for answers that can help reverse the subordination and objective materialism, which are prevalent in today’s society. What are the thoughts, doubts, fears, uncertainties, and reflections that we have and experience as we head towards the new material and immaterial territories, which we are to inhabit in the future? In a world increasingly becoming chaotic and inhumane, I found that all around us are racial and tribal wars, artificially constructed boundaries, confusion, and conflicts. How should we interpret these “Signs of Times” in their context? In what way are contemporary media arts responsible for a transformation of society? The concept of the art project “At the Dawn of the 21st Century: A View-Thought ‘The Red Window’” (“The Critical Time of the World Civilization”) originated in the digital experiments with the photomontage materials. Later, I added some architectural elements, electronic light controls, sound effects, so that this project evolved into a three-dimensional work. I combined all these elements and blended them in the abstract world of my imagination, in order to create in reality an artistic and public space lived through time. Since 1996, this project has been accepted to several exhibitions: “Tomorrow Where Shall We Live?” (curated by Toyo Ito and supported by the Japan Foundation, Faculty of Architecture, Chulalongkorn University, 1996); “Utopia 1997” (curated by Apinan Poshyananda, the Art Center, Center of Academic Resources, Chulalongkorn University, 1997); “OPEN’ 999,” 2nd International Exhibition of Sculpture and Installations in Lido, Venice/“II Esposizione Internazionale di Sculture e Installazioni Lido di Venezia” (curated by Paolo de Grandis and Pierre Restary, organized by the Arte Communications and supported by the Assessor of Culture of Venice, Italy, 1999); “Siggraph 2000” (curated by Diane Gromala, Art Galleries, Ernest N. Memorial Convention Center, New Orleans, USA, 2000); Palace of Light, Art and Culture in the Public Space (curated and organized by Davis O. Nejo, Cross Cultural Communication, supported by European Union and Wien Kulture, Vienna, Austria, 2003); “Luleå Winter Biennial 2004” (curated and organized by KILen-The artist group in Luleå, supported by The European Union Structure fund Goal 1, Luleå municipality, Luleå Employment office-Culture and Media, County Administrative Board of Norrbotten, Norrbotten County Council, The Swedish National Council for Cultural Affairs and The Swedish Institute, Luleå, Sweden, 2004); The Installation series of “Untitled 2007” (curate and organize by Uchida Hiroshi, support by The Japan Foundation, 2007); Installation series of Untitled (Wishes, Lies and Dreams), (curated and organize by Eunjung Son and Sohee Kim /Curator, Alternative Space LOOP, Somee Kim/Program manager, MIZY Center, PROJECT STANDING BY OOO. season4, XI Gallery, Seoul, Korea, August 2008); Installation series of Untitled (Wishes, Lies and Dreams), (curated and organize by Cheong Jong Hyo, Choi A Reum, KIAF Operation Committees and Galleries Associate of Korea, The Installation series of Untitled (Wishes, Lies and Dreams), Korea International Art Fair 2008, Seoul, Korea, September 2008). It was mentioned by Diane Gromala (Georgia Tech, Atlanta, USA), Steven Dietz (Walker Art Center, Minneapolis, USA), Andrew Glassner (Microsolf Research), Thecla Schiphorst (Technical University of British Columbia, Vancouver, Canada), Marla Schweppe (Rochester Institute of Technology, USA), Seth Thompson (New York, USA), Jill Chopyak Hogan (The Institute for Community Research, Connecticut, USA), John Emigh, Katherine Chavez, Ken Prestininzi (Brown University, Rhode Island USA), Kenneth Cushner (Kent State University, Ohio, USA) and Klaus Jonas (University of Zurich, Switzerland).

The project’s emphasis is on the two interwoven processes. The first step was to search for new expressive possibilities afforded by the contemporary visual language, as related to the cutting edge of “The Critical Time of the World Civilization.” I have explored the mental processes and various paradigms in order to represent the contemporary civilization clearly, without biases — the action that always constitutes specific challenges for contemporary art, modern art and/or media arts. I had experimented with real-practice problems and analyzed the way in which they affect the internal sense until I was able to come up with the design solution. The results of the first step will have to be tested and the various findings project will have to be integrated. The conclusion will be drawn when research work associated with the New Art project will have been accomplished and the final ways of art will have been established.

From the 17th century onward, the advancement of new technologies has had a tremendous impact on every human being in the world. At the same time, the scientific developments have provoked numerous ethical and moral issues. High-end technology is often times goes against the faith and religious believes in heaven (just one but vivid example: through the scientific experiments humans managed to produce new life by cloning, in the course of which new cells are being created by means of bioengineering). In my view, the effort to invent new goods following the demand and basic human needs means simply to satisfy the desire and passion of the basic individual living. The varieties of happiness look as Virtual Reality that refer to the fifth internal senses’ content only a section short-temporary or extremely mobilize new-science technology to seek benefit of all directions. Nobody even thinks of a future if they know that they can gain immediate benefits from the fusion of sub-particles and atoms. In a search for new territories, they are ready to go to the outermost galaxies of the solar system, for their desire does not know an end. Some people strive to set up and expand their administrative power while hunting for the new colonies that would reinforce their status as masters in the world. (Looking at the weak subordinate is an act of supremacy.) With the progress of technology, our morality is vanishing. Lack of morality becomes an insanity of the many; including separating a rack of mobility among the gain and the loss, a superior and inferior of an extremely discrimination. Aesthetical feeling, memory, optimism and common sense — all these are being distorted and destroyed because of a profound change in the human behavior in the last century. Our society is producing nothing in peace. The virgin world was painfully trapped and damaged by illusionist tricks. This current situation cannot be neglected or left without rethinking, and this becomes the central focus as well as the cutting edge of “The Critical Time of the World Civilization.”

Our world is full of uncertainties and ambiguities. The society views its surroundings in a purely scientific way. In my opinion, civilization with its science is unable to provide valid answers or satisfactory explanations. Frequently, knowledge comes with the power whose impact reaches far beyond the individual’s intuition and intellect. Scientific achievements have challenged moral codes and ethics as well as faith and religion. Science and technology can bring a threat and do harm to the humanity. The reverse side of utopia is pessimism. A human quest to conquer distant galaxies and an endless search for new colonies reflect the longing for power, aggrandizement, and control. The imbalance of power between those who control and those who are controlled has led to a general disorder and the dilemmas. In the era of mass confusion and distorted values, aesthetics and common sense are greatly subverted. In the early 21st century, we are facing the crisis of the world civilization.

The original concept/ideas “At the Dawn of the 21st Century: A View-Thought ‘The Red Window’” (“The Critical Time of the World Civilization”) expanded into a three-dimensional work, which contains the architectural structure, electronic lighting control, and sound effects thus creating a living spatial–temporary environment.

5. Fukuoka Asian Art Museum, A Lecture by Sarawut Chutiwongpeti on His Work and Media Art in Thailand, Fukuoka, Japan, March 2000

6. Kobe University of Design, A Lecture by Sarawut Chutiwongpeti on His Work and Media Art in Thailand, Kobe, Japan, March 2000 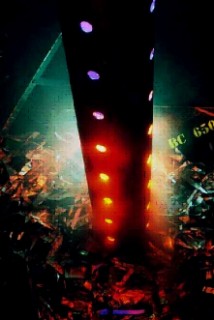 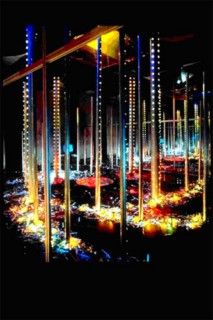 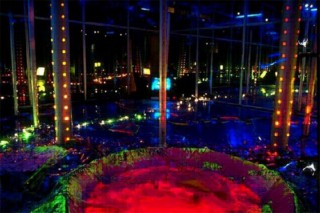 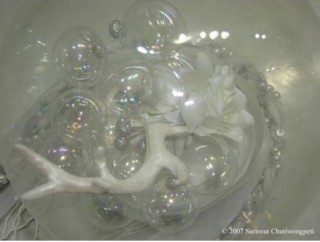 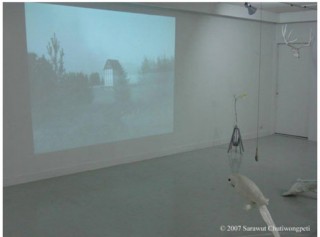