A rather decent violin player called, Albert Einstein once said that

“…one of the strongest motives that lead men to art and science is escape from everyday life with its painful crudity and hopeless dreariness, from the fetters of one’s own ever-shifting desires.  A finely tempered nature longs to escape from the personal life into the world of objective perception and thought.”

Quoting Einstein may appear trite in this day and age but it is uniquely a propos in the context of interaction between art, science and society. It is hard to think of another, who managed to personify science and intellect and enable some of humanity’s most creative and most destructive elements.

The statement about the shared motivations of artists and scientists is heartening in that it points to a commonality of creative spirit and equally to common challenges faces by artists in their roles in society and in their relationship with general audiences, for whom the creative processes of both science and art often remain a mystery. Nonetheless contemporary political, social and environmental challenges render Einstein’s statement both anachronistic and escapist, something that luckily both contemporary artists and scientist recognize in making a concerted return to constructive and often collaborative engagement with the problems of the world. In doing so, both spheres can and have been found to encounter complementary parameters, which can be utilized to bring them closer to the societies and people they are ultimately there to serve and to enrich each other’s work.

The issue of collaboration has perhaps been easier to negotiate in Australia, where problems of isolation and smallness of the population, make inter-disciplinary connections perhaps more inevitable than in countries not afflicted by the “tyranny of distance”. Also relevant is the notion that geographic detachment dictates a certain understanding and approach to art and science which is rich in re-addressing both art and science to the connection with the environment.

One Australian artist, who is managing to single-handedly change models of perception of public art and technology, develop new modes of cooperation between artists and scientist and to influence the development of new technologies for new environmental concerns is Allan Giddy.

Giddy’s work is founded on the principle of using art as a prism for transformation of perception, communication and creating new paradigms of living and relating to our world and the environment. He is particularly sensitive to the fact that historically, scientific progress has been marred by the sponsorship of forces motivated by destruction, with much innovation even today either being sponsored or geared towards military use, intrinsically antagonistic to humanitarian ideals. Giddy’s purpose is to subvert this paradigm, with projects and works that speak intrinsically to our most humane, constructive and peaceful motivations and convert technologies to this purpose. In this process his background of working with energy sources acquires a special significance and has provided a unique opportunity for artists and scientists to collaborate on testing innovative technology and producing self-sustaining artworks using both analogue and digital media technologies with off-the-grid power systems.

In Earth v Sky (twilight trees) a project for the municipality of the City of Sydney completed in August 2007, the artist utilizes the worlds first colour-sensitive and wind-powered public light control system is being developed specifically for this task, with the assistance of photovoltaics expert Robert Largent (Manager, Design Assistance Division, Centre for Photovoltaic Engineering, Centre of Excellence for Advanced Silicon Photovoltaics and Photonics, UNSW).

His subject are two highly prominent Moreton Bay Figs (large native Australian trees with wide spreading branches) in a prominent Sydney Harbour waterfront location, which when illuminated from both sides respond to the changing shades of the twilight and night sky.  As the lighting system continuously adjusts in real time, particularly noticeable during sunset, the trees visually complement the changing colours in the sky, which  becomes especially visible at twilight and sunset. As the sky progressively turns yellow, orange and red with the setting sun, the trees will transform through the blue-green part of the spectrum.  The commuter crowds returning home by ferry on the Paramatta River each night enjoy the ongoing chromatic dialogue between the Earth and the Sky but also will be subtly sensitized by how colours are affected by air-pressure and other aspects of the atmosphere and in small part regain their almost primal sensitivity and wonder and the interconnections of the natural world through the medium of art and cutting edge technology.

e.g. as the sky turns yellow/orange the trees will become blue/green.

In Weather Cranes completed in March 2007 for the Sydney Olympic Park Authority at the heritage “The Armory’ site, Giddy turns his energy to reclaiming for the humanity the invasions of earlier forms of technology but rendering two heritage-listed cranes humidity and temperature sensitive. Each crane holds aloft (on its pulley wire) a set of switched, weather-responsive coloured indicator lights.  One of these sets of lights responds to temperature, and the other to relative humidity.  The lights range in colour from blue at the top of the chain, through green and amber, to red at the bottom.  Switching controllers, custom-built for this project, are installed in the crane cabs.  In conditions of extreme heat and humidity, the colour of the cab interiors also deepens.

Uniquely, these artworks are examples of self-sustaining work in which the energy source form part of the aesthetic of the artworks themselves and recast technologies in a humane and environmentally integrated way. In effect embedding ecological practice in experimental public art.

Giddy’s research has been a catalyst for developing a set of innovative renewable energy source solutions to energy usage and storage with broader social utilities in light-generation and telecommunications and public utilities, which directly address contemporary environmental management challenges in sensitive ecological sites.

Concurrently, however, Giddy maintains the efficacy of his expertise, never delivering works of an amateur inventor anxious to prove a point. Works like Earth v Sky or Weather Cranes, achieve outcomes that are undeniably art and effortlessly poetic, while being subtly but emphatically ideologically motivated. They allow for re-affirmation of art is an opportunity, a space and a conversation that concerns us as individuals in a shared and a connected environment which we often become oblivious to in the white noise of quotidian concerns and detachment of a world perceived through the mediation of technologies and their equivocal legacy. Giddy’s work is a generous and necessary gift which enables audiences to re-think, re-invent, rehabilitate and reconnect people, technology and the environment.

“Well, I’ve often seen a cat without a grin, thought Alice, but a grin without a cat? It’s the most curious thing I’ve seen in all my life!” Alice in Wonderland, speaking about the Cheshire Cat.

According to Martin Gardner’s The Annotated Alice, this remark is in fact a pique by Lewis Carroll at mathematics, for having detached itself completely from the natural world. Had Carroll lived to witness the developments in quantum theory over the past century, Carroll may have spoken too quickly and too harshly of theorizing for surely the grin without a cat is no less curious than the fate of its cousin place in a box by Schrodinger.1

The advent of quantum physics has made the materialist philosophy to which science was welded to until early early 20th century and which made it inherently antagonistic to all forms of spiritual insight, has ceased to be sustainable. It had also built some bridges between science, philosophy and art and perhaps for the first time since the Stone Age to magic! Conversely scientific developments have also given artists new tools to interrogate the nature of their work and their relationship with their audiences.

“If one wants to give an accurate description of the elementary particle… the only thing which can be written down as description is a probability function. But then one sees that not even the quality of being… belongs to what is described.”2

“All things — from Brahma the creator down to a single blade of grass – are… simply appearances and not real.”3

As a consequence, for the first time in history, science, art and philosophy can converse on the subject of immateriality, which have previously been relegated to purely spiritual, religious or imaginary and relate to each other on the subject of perceptions in a way that has not been possible since the Stone Age when art still belonged in the realm of magic together with all learning as practiced by shamans and witchdoctors. The paths split by civilizational developments can now be re-united split in the road can now be reunited.

This unified conversation has been particularly fruitful in the sphere of perception and our understanding the reality of experiencing the apparently material world. Art has always been about understanding the spiritual and conveying the immaterial through the material and seeing beyond the physical nature of the object world. Science too is now operating in the domain of “magic” – for as Niels Bohr once said, “Niels Bohr once said that, “Anyone who is not shocked by quantum theory has not understood it.”

In this context the research and installation works over the past two decades of William Seeto, an Australian artist, have created some potent paradigms. His ongoing artistic investigations and research have been catalysed and enabled by his interest in the Ganzfeld effect, which is a phenomenon of visual perception where the brain produces apparent blindness and altered states when we are staring at an undifferentiated field of colour.4 Oscillate between the normative and the positive aspects of the art experience his practice addresses intimately and intrinsically the fluidity of perception that becomes art and the scientific phenomena that enable it. For over two decades Seeto has of installation work based on the investigation of space and perception.

Seeto’s path describes a trajectory on a quest for self-awareness and the perpetual concern of where consciousness and perception reside, with rigorous normative parametres. The touchstones of his work are ultimate symptoms of humanity. The question “where does art happen?” is a cogent as the question “who are we? And “what is the nature of the world we perceive and appear to inhabit?”

In Seeto’s major works such as « Error of Closure – Part 2 », at Artspace Visual Arts Centre, in Sydney in 2007, we are presented with a constructed darkly monochrome architectural space in which aspects of Ganzfeld are utilized to enable the viewer to focus back on their own sensibilities, drawing their attention to the sensory processes of acquiring and interpreting information on a visceral, as well as intellectual level. Engaging with the work, one is thrust almost spontaneously into a symphonic emotional turbulence, which is shockingly at odds with the sensory void of the work itself – the effect is indelible and unforgettable — magic!

Concurrently the work demonstrates and experiments with the possibilities and effects of interaction of light and consciousness which get subsumed in the noise of of our information rich world and extend to the spectrum of visible yet inexplicable phenomena such as natures most spectacular phenomena – Aurora borealis – Seeto’s current project.

This work actively furthers the field of research into Aurora borealis with an ambition to replication of the phenomenon in controlled conditions of a gallery space. This investigations directly engages with the role which human sensory perception plays in our understanding of visual and kinaesthetic perception of space and light. Seeto’s work thereby traverses and unifies the discrete scientific phenomena and research approaches through the prism of human perception and experience, in a way that only art can and is in fact mandated to do.

Seeto’s work transpose our consciousness beyond the delusions of our perception of the limits of the materially circumscribed world and approach the understanding of dimensions where our being and time are mere probabilities, possibilities and imaginings with or without feline allegories. 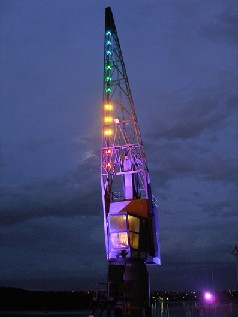 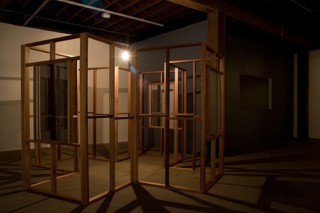 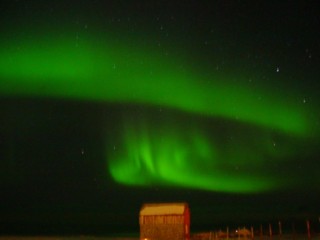 4
Wolfgang Metzger a psychologist discovered Ganzfeld (“complete field” in German) in the 1930’s with experiments that showed that when subjects gazed into a featureless field of vision they consistently hallucinated and their electroencephalograms changed.