The circumpolar Arctic cultural, ecological, geophysical, geopolitical and socio-economic Zones are recognized as one of the most dynamic components of planetary systems that are undergoing extreme transformation in a multitude of interconnected domains. The cultures that inhabit these Zones form an integral part of these transformative processes through constant adaptation that is integral to their survival and thriving. One of the International Polar Year (IPY 2007/2009) projects that later formed the basis of the Arctic Perspective Initiative1 (API) developments was the Interpolar Transnational Art Science Constellation2 (I-TASC, IPY 419), which was based on principles of participatory and open cultural, artistic, scientific, tactical media and technological exchanges on an interpolar (North/South) basis. The experiences in developing and deploying open technology systems, from community operated FM radio setups to long distance weather sensor networks in Antarctica and community discussions and consultations about autonomous communications and mobile habitation systems in Nunavut during the IPY, formed a solid basis for the establishment of the Arctic Perspective Initiative, an artist run long term program of engagement with the northern circumpolar cultural and natural ecosystems.

These cultural and natural ecosystems present formidable geopolitical, political and semantic challenges, since they reside in territories that are deeply interpreted and projected from the Southern, or if we want to equalize on an ideological/developmental – scientific versus indigenous scale, Western perspectives.

And this is exactly the point where we cannot separate the circumpolar regions from the rest of the global systems just to observe and reflect them, but we must view them as an integral part of a much larger systemic, second order network that is global in scale, consequences and traversed by an extremely large number of feedback loops.

The Arctic is not only a vast Ocean, covered by sea ice of diminishing surface and thickness, it is also approximately 4 million people, of which half a million have been on the shores and islands of this ocean for at least few thousand years, speaking more than 40 languages. Inupiat, Inuvialuit, Inuit, Kalaallit, Saami, Nenets, Ngansan, Dolgan, Khant, Enets, Evenk, Yukagir, Chukchi, Kerek, Koryak, Alyutor, Itelmen, Kamchadal, Orok, Nivkh, Ainu, Aleut, Yup’ik, Alutiiq, Athabascan, Gwich’in. It is the Land, the ocean floor, the ocean life, animals, and plants.

It is the thin atmosphere, full of ionized particles. It is the immense infrastructures for hydrocarbon energy extraction that fuels the furnaces of Southern economies. It is the infrastructure of missile early warning over the horizon integrated radar systems chirping away in the electromagnetic soundscape of this EM central of the world. It is the Zone where the polychlorinated biphenyls (PCBs) of the world have been accumulating for decades with a little help of a few local sources as the aforementioned hot early warning radar sites that used them for cooling. It is the Zone of at least 224 nuclear device detonations, among them the RDS-220 in October 1961, the “Big Ivan”, the largest ever hydrogen nuclear bomb explosion in the history of the world, 50 megatons. An 8km mile fireball, a mushroom cloud reaching almost 65km into the upper atmosphere, broken windows 1000 km away, transparent clouds and disrupted radio traffic for an hour. Total pollution for generations to come.

The Arctic and especially Kara sea is also the graveyard of old reactors and deceased submarines, which once roamed and chased their counterparts under the Ice and by the latest evidence, continue to do so today. The new northern battlefield contingency plans are being re-imagined today in the planning rooms of the military geopolitical complex. The Arctic is the Zone of where Southern/Western scientific paradigms and infrastructures ran amok to understand, but also to disrupt, disfigure and change. It is the Zone where contingency plans are made to save ships that have never even sailed through the so called Northwestern and Northeastern passages, literally, to save them from themselves. Supposed cargo ship passages for vessels that could themselves, with the help of the sea ice, destroy what is left and finish the job. It is also the landscape of a striking mad rush to map the bottom of that Ocean, one of the many unknown unknowns still to be catalogued. The extraction paradigms are so present and persistent, evidenced by the explosion of “the Arctic” in the Southern news in the past 4 years, that the Zone has started to be seen yet again (after the whaling and trading disasters of the nineteen hundreds) as a viable expansion area for the global dragons of Capital who are clawing North with their armies of sovereign, international and even NGO and scientific vassals.

But the People are still there. Half a million witnesses of the Land being transformed in a mere 100 years, with an accelerated rhythm in the last 60.

There are governance mechanisms that at least provide some sort of structure to this networked entanglements and loops. The Arctic Council is one of them. It has produced nine declarations so far and every two years reaffirms that more work is needed. The Council includes Canada, the Kingdom of Denmark with Greenland and Faroe Islands, Finland, Iceland, Norway, Russia, Sweden, the United States and six international Indigenous organizations, Arctic Athabaskan Council, Aleut International Association, Gwich’in Council International, Inuit Circumpolar Council, Russian Association of Indigenous Peoples of the North RAIPON and the Saami Council. For the Arctic Perspective Initiative the council’s persistent declaration production has led to the response in form of one, the result of the Arctic Perspective Open Space conference in the Phoenix Halle in Germany in 2010. This is how it reads:

The participants of the Arctic Perspective Initiative Open Space 2010 conference and the undersigned,

Recognizing that it is in the interest of all humankind that the Arctic, its Peoples and their cultures, its
wildlife and its environment shall continue to exist peacefully and shall not continue to be the scene or
object of colonization, natural resources exploitation and international discord;

Acknowledging the substantial contributions to human culture and knowledge by the Arctic Peoples;

Acknowledging that intercultural and interdisciplinary cooperation within the Arctic contributes to the
understanding of the world as a global system;

Affirming the values and principles of Inuit Qaujimajatuqangit;

Convinced that the establishment of a firm foundation for the continuation and development of
cooperation based on open and free exchange of knowledge, expression and methodologies accords with
the interests of the Arctic Peoples and all humankind while recognizing dependence and
interconnectedness with the global ecosystem;

Convinced also that a declaration ensuring the respect of the Arctic, its people, wildlife and
environment will further the principles of the UN Declaration on the Rights of Indigenous Peoples and
point towards sustainable Arctic futures;
have agreed to the following:

2) To advance the convergence of the home as center and the frontier as homeland through the
Arctic Peoples freedom of choice to live a sedentary life or pursue strategies of renomadisation
and life on the land;

3) To embrace an ethos of material and resource conservation and preservation;

4) To recognize the continuity of past and present by giving new life to old myths, including the right
to protect and develop past, present, and future manifestations thereof;

6) To establish open, dynamic and long-term modes of arctic inter-regional and north-south
communication and collaboration in the art, traditional knowledge, science, technology and
economic fields;

7) To embrace the knowledge and learning potential of sharing, listening, showing and telling;

8) To recognize the interconnectedness of art and life while remaining open to the rhythms of
indigenous Arctic cultures and environment;

9) To promote the importance of autonomy and self governance;
The provisions set forth in this declaration shall be interpreted with respect for human rights, the
environment, wildlife and equality for all.

The most important lesson that we could take from our engagement with the Zone is that one of the basic properties that unite almost all of the circumpolar Indigenous Peoples is their deep set of knowledges about the Land and the ability to nomadically navigate it. In our opinion, this knowledges, coupled with a strong set of methods to chart and re-map the Land with Western methodologies and new tools, such as autonomous remote sensing aircraft with unprecedented ground sampling distance capabilities and autonomous sensor networks, capable of recording environmental and Local and Traditional Knowledges (LTK) data, form a new paradigm that empowers, networks and positions the circumpolar LTK generation and exchange paradigms within global contexts of resistance.

To this effect, API spearheaded the development of the SINUNI open mobile data gathering network and devices from 2009 until now and tested them in limited conditions in the field in Nunavut and Lapland. The SINUNI is an extremely low-power, compact, modular and waterproof portable computing and recording family of devices implementing a true mesh networking capability through low power radio and precise geo-location. It’s modular sensor architecture records basic meteorological, position and movement data, but it can be outfitted with an array of sensors as diverse as water turbidity, temperature, salinity and P.E. light quality and structure measurements. The open standards used in the software and hardware development ensure that the system can be built, modified and replicated in the North. The units also enable geo-located audio recording and wildlife observations and audio note taking through a simple, robust and intuitive interface. During the field exchanges in the Foxe Basin, the Fury and Hecla straits area and Lapland large amount of environmental, wildlife observation and traditional placenames and trail data was collected. Besides the SINUNI, API has deployed fixed wing unmanned aerial vehicles, the Bramor UAS, to create orthophoto and terrain maps of the observed areas.

The SINUNI system enables instant review of the collection in the field, but more importantly, its mesh architecture enables a seamless transfer of data and network bridging between the different units without any specific inputs from the users, leaving them free to concentrate on the work on the Land. The geo-locative approach to all data and sound recording gathering facilitates the creation of quick reference maps with audio annotations and the entry of the data in GIS systems. The main goal of the project at this stage is to enable a true collaborative engagement of indigenous field “citizen scientists”, possessing raw data and traditional knowledge entries, with the Arctic science complex, where the ownership and provenience of the data is clearly connected to work and life on the Land and can be freely shared between and understood by the communities. A larger future collection saturation and the creation of a display system for data sharing and distribution in several Arctic languages is envisaged. The goal of the SINUNI program is to collect the results and create case studies for each community and to explore the potentials for building such a network of hybrid audio/visual sensor based hardware, combined with a database and management program that is flexible enough to serve varied communities yet continues to enable interoperability. SINUNI is being developed for one main reason: to enable Indigenous data gathering and exchanges throughout the Circumpolar region, disregarding the current legal and geopolitical obstacles and pushing for more autonomy through true informed and empowered resistance, renomadisation and the affirmation of decentering. Autonomy through technology is one of the mottos of the API and our engagement in the Zone has barely started.

Schematic of the API technological systems, developed and in development 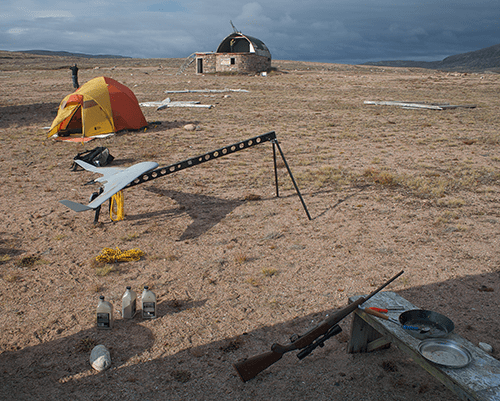 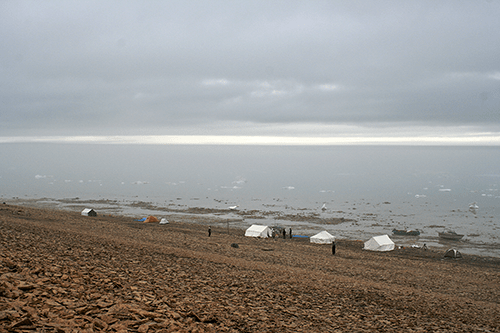 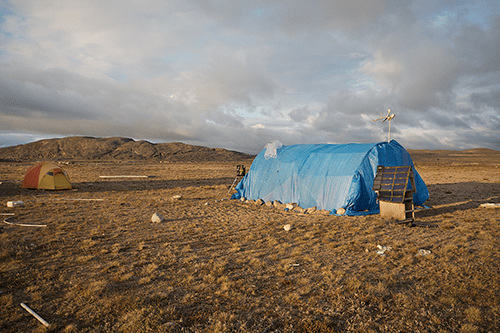 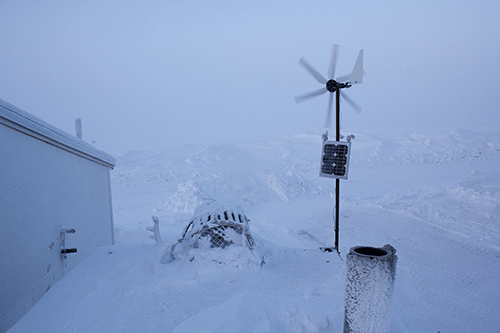 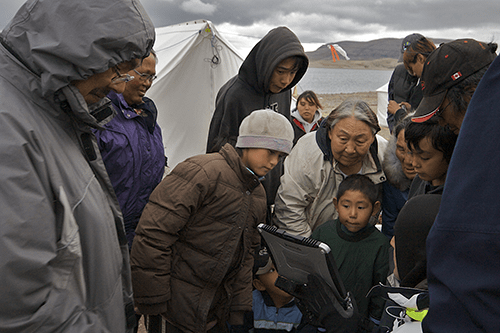 Sharing the aerial imagery with the community, Field Exchanges 2009